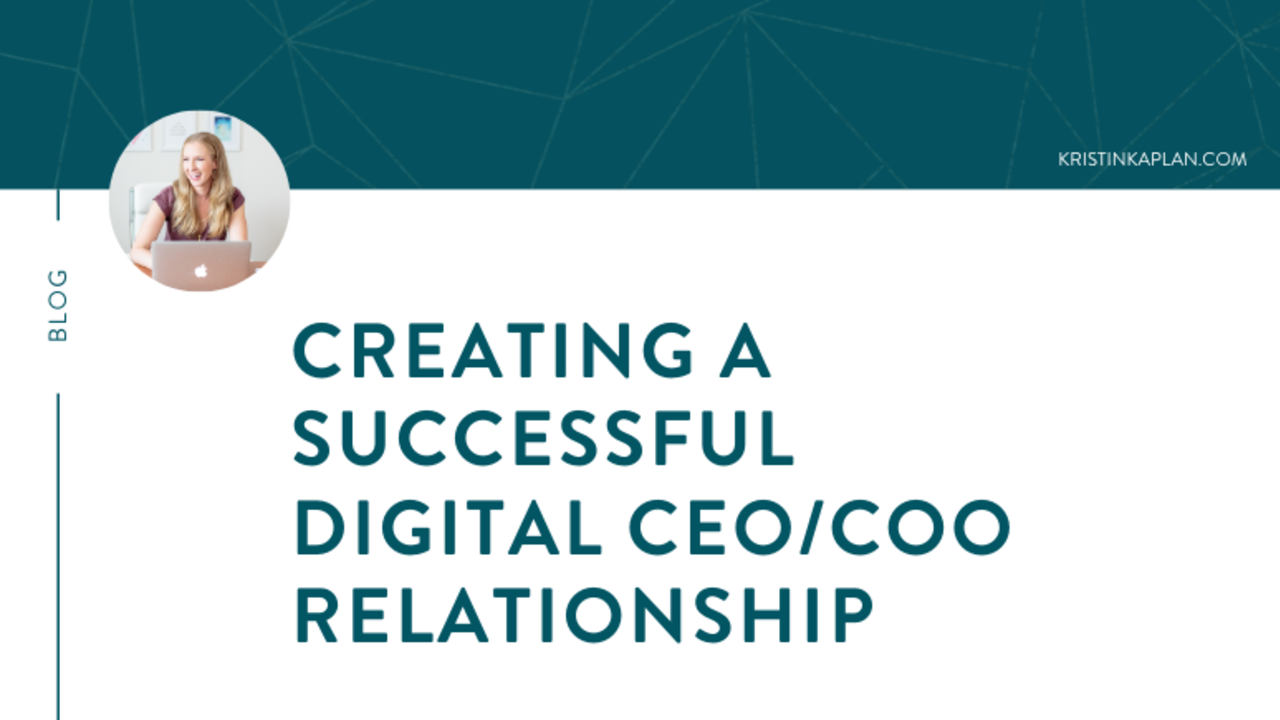 As more and more business owners are bringing on integrators to their teams, it’s crucial to have a realistic idea of what the working relationship between the Digital CEO and COO (or visionary and integrator) is going to be like. You need to know how to keep things on track and be successful. I’m going to address what that relationship looks like, what to expect, what it doesn’t look like, and the ways in which to set the relationship up for success.

Now I'm referring to online business here, not brick and mortar or corporations or anything. So the COO can be an employee whether full time or part time, or a contractor (which is what I operate as.) I think in the most successful CEO/COO relationships there is a partnership. Now of course the COO isn’t usually invested in the business as a true legal partner or anything, but there has to be a sense of equality because both the CEO and COO bring many valuable traits, skills, and differing personality types to the business. And those traits and personality types are usually the opposite of one another. So what one has the other lacks, and vice versa which is what makes having both a strong CEO and a strong COO so valuable to a business.

You really need the visionary’s big ideas, relationship building, and strategy, but you also need the structure, organization, and detail that the COO brings to the business. By virtue of the CEO and COO often having opposite personality types and skill sets, there can be friction. You see this happen when the visionary might want to move fast and take action, while the integrator or COO is going to insist on being more methodical and logical, which leaders to acting slower. Or maybe the CEO is constantly coming up with new ideas and wanting to pivot to different projects, while the COO is wanting to pull back the reins, stay on course, and see things through to the finish line before starting on a new project. As you can see if both people are wanting two different things or wanting to constantly use differing approaches, that can of course cause some friction and frustration at times, which is totally normal.

Therefore both the CEO and COO need to be partners and always have the end goal in mind. Most importantly, they both must be able to not take other suggestions or ideas from each other personally. So they really should feel like partners and equals in driving the business objectives forward. A COO is not merely a task maker for the CEO. There should never be this concept of “I as the CEO have all the ideas, and whether you like them or not you task them out to the team”. That’s honestly more of a project management role (which is one aspect of what a great Digital COO does but it’s not the only thing). It should more be like “I as the CEO have this idea or want to tackle this project, what do you think? Can we fit this in right now?” And then from there a discussion can be had, and a direction chosen. Only then does the team move forward. It’s very much a symbiotic partnership: both persons using their inherent gifts, talents, skills, and strengths, to achieve a primary objective.

As such, it’s really important that there is a lot of trust between both the CEO and COO. They both need to respect each others skills, wisdom, and strength, as well as listen & learn from each other. Also they cannot be afraid to have tough discussions sometimes. I have to say no a lot to my CEO clients, and I hate to do it, but I’m always trying to do what’s best for the team and for the business objectives. Sometimes, the COO has tell the CEO that “no, we just can’t make that launch happen in only 4 weeks” or “sorry, we can’t ask that team member to do that in a 48 hour turnaround because as a contractor they require at least 5 days.”

No one likes to be told no, especially a visionary CEO who’s super excited about a new idea, but it’s a part of the COO’s job. And it’s technically not a straight up no, it’s more of a redirect - “here are all the other things we need to consider at the moment” or “have you looked at this from another angle.” But you need that trust, that partnership, that push and pull, that polarity, because that’s what actually moves the needle forward in the business. It’s putting two very different minds with very different strengths together to best achieve a goal or desired outcome.

One final note on what the COO is not for the CEO - the idea person or the primary strategist. It’s not the COO’s job to come up with the offers, the positioning, the messaging or create your products for you as the CEO. I covered this topic more in-depth of a recent episode of Planning for Profit, so check it out!

Let’s shift gears now into best practices to set up your CEO and COO partnership for success.

(1) Use data to drive decision making. There are tons of decisions to be made daily in any business let alone an online business. Typically someone in the CEO role is a visionary and prefers to make decisions from a place of feeling or intuition, while the COO personality leans towards making decisions from a place of thinking and logic, there might be times when the CEO and COO disagrees on what the decision should be. And I think it’s important to get back to the facts. For example, let’s say the CEO wants to raise the price of their offer before the next launch, but the COO is worried that’s going to have a negative effect on sales and revenue. So what should they do? Well look at the data. What was the conversion rate during the last launch? If it was higher than average then it’s safe to say that it’s time to raise the price. For those that didn’t purchase, was it because of price? What was the value of the bonus package? There is tons of data available to help in making that decision rather than just “because I feel like”. I’m always saying to my clients “well let’s look at the data”, “what are the numbers telling us”, “what are the survey results telling us.”

(2) Always keep the ultimate goal in mind. It’s so important that there is a clear why or a clear objective that the business is aiming for whether that be impacting 1000 students this year with your programs or bringing in $250K in revenue, while keeping operating expenses under 30%. Your goals may be related to time or quality of life, such as the CEO is only working 25 hours per week and off every afternoon at 3 PM. Now the business can’t have an unlimited set of different ultimate goals because then which one do you point to when you’re trying to make a decision or come up with a solution to a problem. But if you’ve always got one ultimate goal, you can look to that. Both the CEO and COO should always understand what is the ultimate goal, the ultimate priority of the business.

(3) Always understand the ‘why’ behind every decision. If one of my CEO’s comes to me and says “hey I want to do this thing”, and I’m worried that we can’t fit it in with our current projects, or it might distract us from our ultimate goal - my first question is a simple, “can I get some background on why you want to pursue this?” What is it that the CEO is truly looking for? What do they truly want to accomplish? Because then I can better understand how this idea fits into the grand scheme of the business and the current projects at hand. And often times this is where the mindset shifts happen. To hear more about mindset shifts, the importance of honesty in this relationship, and examples of what happens when the COO and CEO are confused about the ultimate goal, then hit up this episode of Planning for Profit.