Are You Derailing Your Own Success? 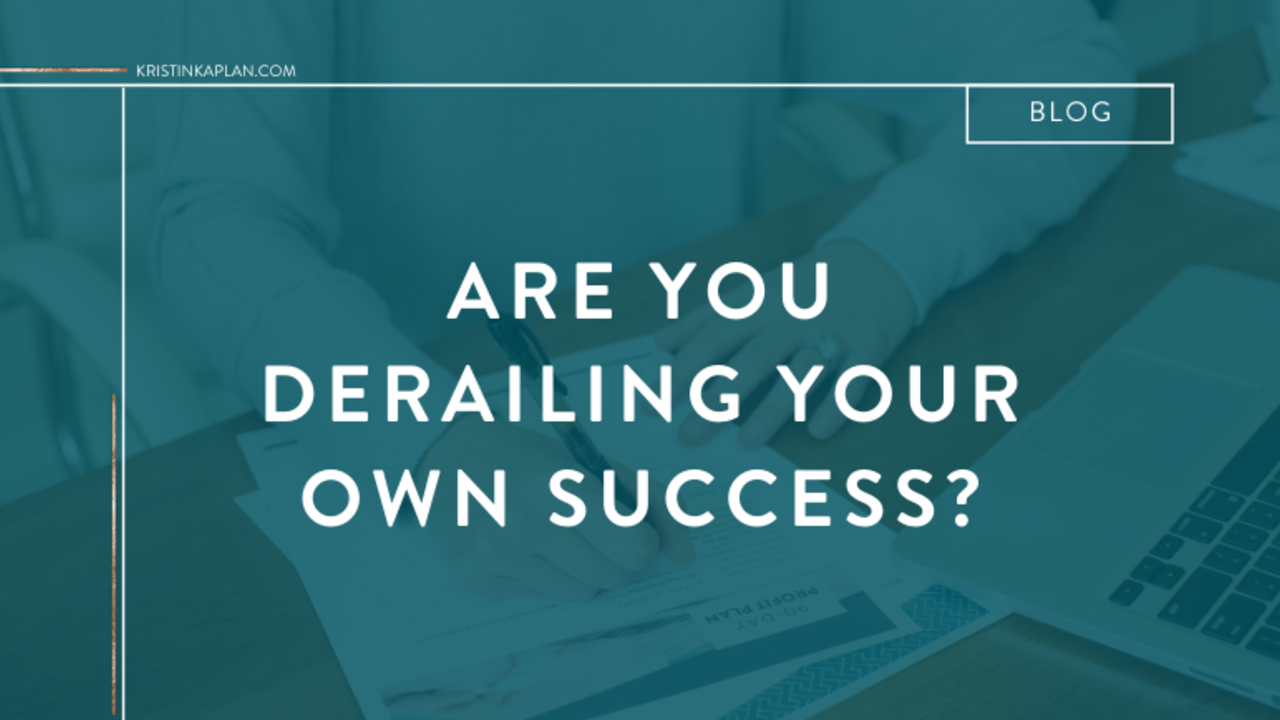 Have you ever felt like your business was stuck? At one point you probably mapped out a vision for your business and thought by the end of 2020, I want to hit X dollars in revenue, launch my offer 4 times, grow my list by 2000 subscribers, and more. And then you find yourself halfway through the year and you haven’t launched that offer yet, you keep pushing back your launch date, and you’ve made some strides in growing your email list but you’re not on track to hit your subscriber goal. You think to yourself ‘what the heck, why am I not where I thought I’d be right now?’

It’s because of a little thing called momentum. Gaining momentum is the key to making growth happen in your business much easier. I mean think about it, would you rather run uphill or downhill? Obviously downhill because there’s less resistance, less effort, and as you start to gain speed, you gain momentum and then it gets easier to get where you want to go, faster. The same thing is true for your business. When you gain momentum, it’s going to become easier to grow, easier to scale, and it’s going to require less effort because you’re using that momentum to push yourself further, faster.

Yet so many entrepreneurs aren’t gaining any momentum because they keep starting and stopping and starting and stopping. I see this all the time and maybe you can relate - a business owner has an idea and they get really excited about it. This idea could be a new offer, a new launch, a new podcast, or any new and exciting goal or project.

Then they either spend weeks & months plotting and planning their new idea out OR they just dive headfirst into the new idea and try to get it off the ground as quickly as possible. They start to build some momentum because this big rush of motivation around this shiny, new idea. This idea could be a new offer, a new launch, a new podcast, any new and exciting goal or project.

But then a set back happens or they encounter their first roadblock. So they hit the brakes, go into overwhelm, and just stop working on the new idea. Meanwhile, while in this state of overwhelm or disappointment, they come up with a new idea, and the process begins all over again. And it becomes clear why so many entrepreneurs are stuck. Because when you constantly start and stop and derail project after project or idea after idea, you never gain any momentum. It’s basically the equivalent of running uphill as you grow your business: it’s going to be harder and take way more effort. It’s also it’s going to take you a lot longer to cover the same ground as you would if you were running downhill and using momentum to gain speed and reach your goals faster.

Stop getting in your own way. Stop changing directions. Stop derailing your own progress. Here are three specific ways that entrepreneurs do this in their business and with their teams and launches. But I also offer up advice on what they can do instead to finally get off the hamster wheel and gain some momentum in their business.

(1) Stop creating new offers. I’ve said this before but I’ll say it again. I get that launching the same offer over and over and over gets repetitive and might not feel exciting, but that’s how you gain momentum in your business.If you’re using a launch you’ve already built and simply tweaking and refining it, then you save time, effort, and money. Each launch is going to build momentum for the next launch. If you look at most of the biggest, most successful entrepreneurs out there you’ll see that they got where they were off one primary offer that they scaled to big profits before they started adding layers to their accession model and new offers. That’s the secret! There’s nothing that will keep you stuck longer than creating new offer after new offer after new offer. Stop! Go all in on one offer and work at it until it’s successful or you get proof that it’s not a viable offer. Now I wouldn’t go all in on launching anyway unless you already have proof that it’s a viable offer by doing a beta-launch but that’s a whole other blog post.

(2) Don’t let “lack of motivation” or “lack of inspiration” hold you back. I understand that the fun part of being an entrepreneur is dreaming up those big ideas, making that vision board, and mapping out all the possibilities and plans for your business. And with all that you will have a huge surge of inspiration and motivation. But guess what, that’s not going to last. The excitement and shininess WILL wear off and you’ll be left starting at a long list of tasks you need to execute to bring your idea to life and suddenly it’s not gonna feel so sexy anymore. Yet that’s not a reason to stop taking action.

Action is what gets you results. You have to take action and move forward, even when you’re feeling uninspired, unmotivated, overwhelmed, or even scared. Many visionaries get way caught up their feelings. It’s great to have feelings, but having too many feelings and letting what you’re feeling stop you from taking action is keeping you stuck. I know so many entrepreneurs who spend so many hour planning and dreaming and being “inspired” and very little time “doing” and “taking action” and that’s keeping them stuck.

But let’s be clear, this is not about hustling and working all the time. It’s simply about staying in integrity and doing the things you say you’re going to do, by the date or time you committed to. So when you decide to launch that new podcast by September 1st, or launch that beta-offer next month, well do it! You’ve committed to it! Stop letting fear, and shiny objects, and lack of motivation stand in your way. Map out what needs to get done and start chipping away at the tasks. Take consistent and committed action and stay in integrity with yourself even when you don’t feel like it.

(3) Stop derailing your team. This may be tough to read, but if you have a team, it’s not just about you, it’s about them too. So if you’re constantly derailing your team’s projects and tasks, you’re not just getting in your own way, you’re getting in their way, and you’re stopping their momentum. That’s not very team-like. A team is supposed to work together for maximum impact and momentum. But if you’re constantly getting behind on your tasks, or stopping projects and starting different ones, you’re killing the momentum. If you’re thinking to yourself ‘well it’s my business and I can do whatever I want’….good luck scaling your business because you’re going to need other people to help you do it and you’re going to have a tough time getting people to stick around and work for you if that’s your mindset.

Even if you’re the CEO you are a still a member of the team. If you expect others to help you reach your goals and dreams, then you also need to stay in integrity and not constantly change directions and derail the efforts of the team. (I talked about that a lot in a couple recent episodes of the podcast that I did with my content manager Latasha) This absolutely kills team morale.

Imagine a football team, who practices hard and learns all the plays, and during the game as everyone is doing their part and all of a sudden the person holding the ball just stops running and drops it. They tell their team ‘sorry guys, I’m not feeling super motivated to finish this play’ or ‘I see an obstacle coming up, so let’s just start a different play later.’ As a player on the team who’s been working hard and doing your part, you'd be extremely upset and think ‘this game isn’t just about you!’. And that’s exactly what you’re doing to your team when you consistently derail projects, not complete your own tasks on time, or sometimes even at all, constantly change directions and stop projects only to start different projects. You are killing the momentum of the whole team and more importantly your business!

Consistent action creates momentum, and the more momentum you gain, the faster you’ll reach your goals.  So what do we do instead: how do you stop derailing projects, and take consistent action?

First, it all starts with having a plan. To learn more about creating a plan and the importance of consistency in launching, listen to this episode of Planning For Profit. Also be sure to grab my free launch checklist that I use for myself and with my clients.