How to Make More Revenue by Addressing Your Money Mindset 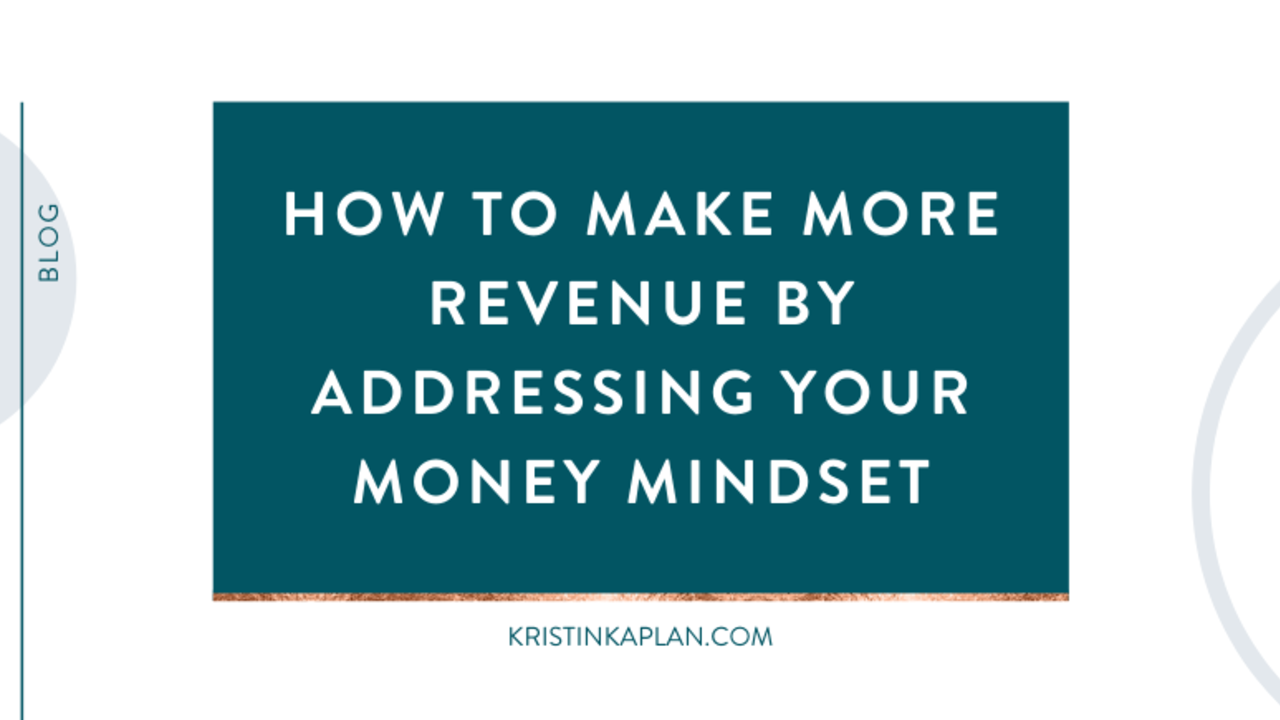 If you know me and you’ve been following me for a while, you know that I teach strategy. I also teach numbers and data — all the left-brained, concrete, tangible stuff. But I will be the first to admit that you can have all the strategy, numbers, and data in the world and still not see the results you want to see in your business.

I know this because I have experienced it. I have tried to approach everything in both life and business from a purely analytical standpoint and I found myself constantly getting in my own way. For a long time it was like I had my foot on both the gas and the brake at the same time; I was moving and making progress and making money but I knew there was more to this whole business and making money thing. And I would hear of people doing things like affirmations and meditation, and visualization and I thought: “Nope that’s a bunch of woo-woo, and it’s not for me. I’m just fine without it.”

Wellllll, it turns out there is something to this whole “mindset” thing. I mean there’s a reason that top athletes like Michael Phelps use visualization to win gold medals at the Olympics. BECAUSE IT WORKS. And while I’m not going to get into ALL the woo-woo stuff, I do want to share more of my own story about addressing money mindset and the results I’ve seen. My hope is that you start to see similar results when you start to approach your business with both strategy AND mindset.

To give you some background on my own money story, I grew up in an affluent suburb outside Boston and pretty much everyone I knew growing up had money, including my family. Yet I was brought up with the notion that money was scarce, money was hard to earn, and we had to hoard it and protect our money even though we had plenty of it. I grew up in one of the richest areas of the country but I’d still get yelled at if I left a light on in my room because “That’s wasting money and money doesn’t go on trees.” So I grew up also believing that money was really hard to make and you had to work REALLY hard to be deserving of money. I also internalized the idea that how much money you make determines how “successful” you are.

So needless to say, I haven’t always had the best relationship with money and — shocker — that has been reflected in my business. I have made good money, but I’ve also been through periods where I worked REALLY hard for it and I sacrificed a lot for it, and I still always felt like money was always the problem. I felt like money was negative, that there would never be enough of it, and that I had to keep it close and be very protective of it.

But guess what? Money isn’t inherently good or bad, money is just a tool. Think of it like rain. Rain on your wedding day is terrible right? At least according to Alanis Morisette. But rain after a 6-month drought is amazing. The rain isn’t good or bad, it’s just a tool. And money is the same way.

So why do we have such an issue with money? Why do we feel weird talking about it with other people? Why do we struggle to ask for it? Why is it such a weird, icky, negative thing?

Because of our money stories.

Usually, we can trace our money stories back to our upbringing and our parents. And due to our money stories, we have a false thoughts and feelings about money. I have spent the past year or two working on my own money stories and my mindset around money and — holy moly — has it made a WORLD of difference in my business. I honestly think my own feelings around money have also helped my clients and my students because I’ve realized something: While I’ve always been good at coaching people on how to be more profitable in their business, how to raise their prices, charge what they are worth, and be more strategic in their offers, the one thing that has stood in the way for so many of my clients and students is their relationship with money.

You can understand exactly what you need to charge and how to position your offer, and have all the strategy in place for a profitable business. But if you’re not addressing your underlying issues with money, your money stories, and your issues with making money, you’re never going to be as profitable as you could be. You’re always going to be stuck with one foot on the gas and one foot on the brake. Mindset is a KEY part of having a more profitable business.

To address that mindset, you need to address your money stories.

Common Money Stories We All Tell Ourselves

So what are some common money stories that we need to address? Let’s tackle a few of my favorites.

Who decided that all rich people were greedy? Where did that come from? This is not one I’ve ever personally struggled with because I grew up around rich people and the majority of them were all wonderfully kind, philanthropic, genuinely amazing people. But if this one resonates with you, ask yourself: Where do you think that comes from? Did someone, maybe a parent, once tell you that rich people were greedy?

“You have to work hard to make money.”

I have always believed that you have to work hard for money, that you aren’t deserving of money unless you’ve put in THE WORK. Can you relate to that? Maybe it’s because I actually am a hard worker. But I also grew up with a father who worked REALLY hard for the life he was able to give us. He traveled all the time, he worked long hours, he checked all the “hard work” boxes, and because of that, I grew up believing that you had to work hard to deserve money.

You had to hustle and work the long hours and only then would you be successful. But I’m sure you can think of examples of people who work 10 hours a week and make millions, or people who seem to be undeserving of money because they haven’t worked hard but, for whatever reason, have a ton of money. This happens because — guess what — money and hard work aren’t actually correlated. You CAN work less and make more.

“If I make a lot of money, my family and friends won’t like me anymore.”

Now this one is a bit tricky because it might be a money story that you don’t actually realize you have. You might be someone who resists making money but, until you dig deeper, you don’t realize why. You might fall into this category if you hold back from talking about your successes with people, or downplay how much you make, or complain about how money is tight even if it’s not. But I have a newsflash for you: if someone reacts poorly to you talking about your success and money, that’s just their money stories and money issues talking.

Because if you started making a lot of money, do you really think you will change THAT much? Do you really think that you are suddenly a bad person and that your family or friends should dislike you? Of course not! You’d still be the same person you are right now.

Of course, it’s next to impossible to just POOF — stop believing these stories. It does take work.

So… how do you address your money stories so they stop blocking that big money you’ve always dreamed of making? The easiest way to do that is by providing a counter-example. Even if you can provide just ONE counter-example, you can prove to yourself that a money story isn’t true.

Just a few of my favorites:

Of course, adapt these counter-examples to you, and find the ones that really resonate. For example, I have to remind myself that some of my most successful launches are the ones that just happened — not the ones I slaved over for hours and weeks and months.

But I don’t just want you to recognize and argue with your money stories; I also want you to examine where they come from.

Find Out Where Your Story Started

Often, we can trace our money beliefs back to a specific event or a specific time in your life. Just like I finally recognize that the reason I always thought that you had to work hard to be deserving of money was because I grew up watching my father work really hard for what we had. When you can pinpoint WHY you think the way you do about money, it becomes easier to dismantle your money beliefs and start thinking differently.

Recognize How Your Money Stories Impact You

For me, one of my biggest money stories is how money relates to success. I grew up in a family that always specified the importance of impeccable grades so that you could get into the best college, so that you could be a doctor or a lawyer or the head of some corporation someday, so you could make a lot of money. Even when I decided to buck the whole system and be a wedding planner and then an entrepreneur, I still believed that my success was tied to a revenue goal.

So what happens though when you tie success and money things together? Everything becomes about the money. Instead of focusing on how many people you are serving or impacting, you’re focused on hitting a revenue goal.

How Changing My Money Story Can Help YOU Change Yours

I’ll be honest, I still struggle with my money mindset. Since I’m so left-brained and all about the numbers, data, and strategy, I can’t help but find myself fixating on the revenue/success part. I inherently love that part of running a business, but when I get too distracted by revenue goals and worrying that I’m only as successful as how much money a particular launch or program makes, I’m not focusing on helping and serving you, my audience. I can’t do my best work as a teacher or a coach if I’m letting that money story lead the way.

This year, I am also revamping The Pricing Workbook — not only to finally address how to price your online products, programs, courses, and/or coaching but ALSO to help you adopt a positive and healthy relationship with money. Of course, these are just additional resources you can use to amp up your money story shifts. My hope is that this article has helped you really dig into what you believe about money and decide if it serves you. If it doesn’t, let’s do the work to fix it.