Lessons From My Launch v.3 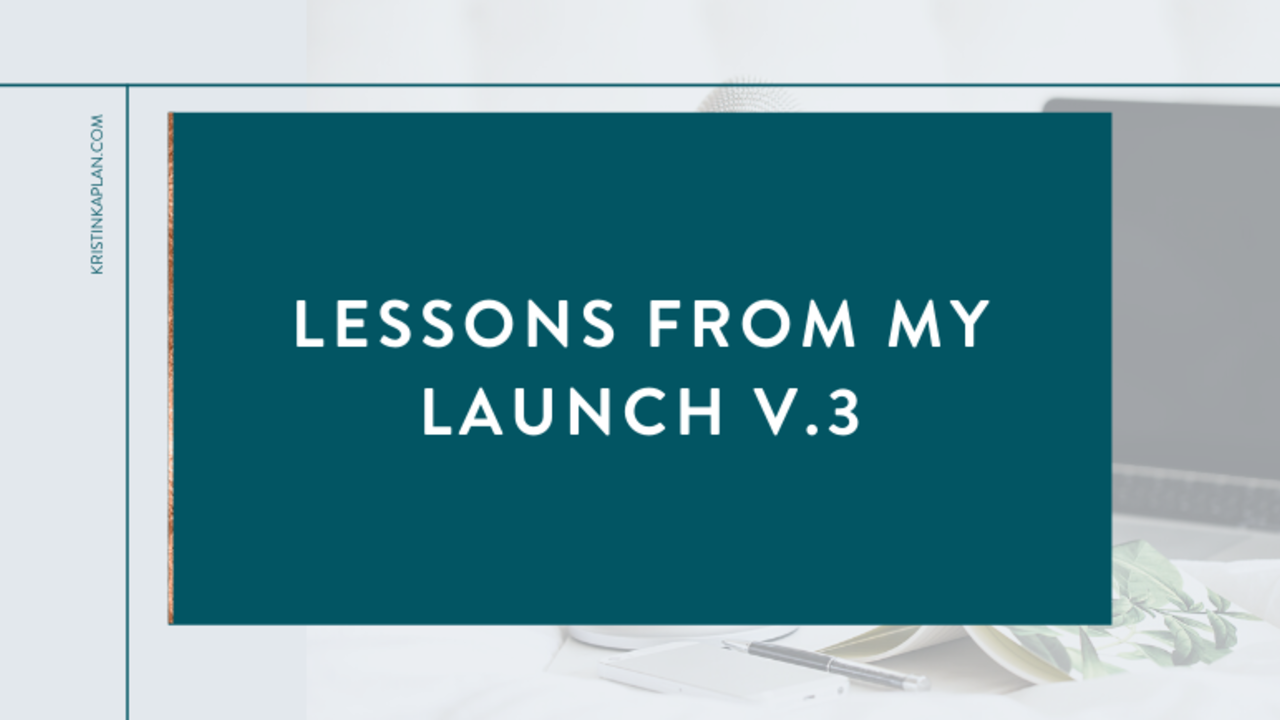 This post is all about launching, specifically the takeaways from my recent launch, which was quite the rollercoaster (thank you 2020). I’m sharing what worked, what didn’t work, aside from launching during both a pandemic and a new civil rights movement, and what I’m going to change or improve the next time. I love to keep it real with you all and give you a peak behind the curtain in the hopes that it helps you improve your next launch, whether you are an online business owner or CEO, or if you’re a Digital COO or integrator type that also helps strategize launches.

Originally I was going to open the doors to my signature program, the Digital COO Academy, where I train COO’s & integrators, in mid April. Well naturally a pandemic happened, and the world turned up side down, and so I moved my launch to late-May/early June instead. And then the world turned upside down again.

So on cart open day for my program, I made the decision to no longer promote it. I didn’t feel that week was the time to be selling, so I didn’t mention it once on social media, I cancelled the webinar, I turned my ads off, and I un-scheduled the dozen or so emails that were ready to go out to my list. But guess what happened? I still made sales, I actually hit my launch goal, and I had a conversion rate of almost 7%. And that’s right, with zero promotion once the cart opened. So how exactly did I do it?

Well let’s start with the launch tips that really made the difference in this launch.

1) Planning out the launch in advance. This launch was in production for a LONG time. I started in January with the expectation of launching in April. I often see entrepreneurs often wanting to just throw a launch together really fast (and yes I’m talking to you my Enneagram 7’s and 3’s) because they are excited about their newest shiny object and they just want to get it out there. But then what often happens is that the messaging isn’t quite on point, and the content and copy is messy or thrown together, or…and here’s the biggie…they haven’t primed their audience for the offer.

When you decide to launch something in two weeks without planning, it’s going to be overwhelming. Also you’re not going to be able to really show up fully and serve your people during the launch because you and or your team is going to be too busy trying to get everything put together.

This launch worked really well because we (meaning my team and I) took our time building it out, from all the emails, FB ads, sales page, landing pages, and more … it’s a lot of copy to write! Thankfully I didn’t write it, my amazing copywriter Latasha Doyle did, but I still had to outline everything. We spent a lot of time making sure the messaging and positioning was speaking well to my audience. All of this planning and writing takes time. There was also graphics to make for the emails, leaning pages, and ads. But because we planned so far ahead, we even had time to test different landing pages.  Plan ahead, give yourself time to build each piece of the launch, especially if it’s a newer launch. Now that it’s totally built out and all we have to do is rinse and repeat it. I won’t need 10 weeks, but I still have already mapped out the next launch in Asana over two months out because I want my team and I to feel confident and relaxed and not overwhelmed as we work to get ready for the next one.

2) Time to warm up my audience and prime them for this specific offer. The other benefit to having a really long launch runway is that it gave me plenty of time to prime my audience for the offer. And the audience I targeted was actually a very new audience for me. We were mainly targeting the COO or integrator types (i.e. VA’s, systems & operations strategists, freelancers, etc.) and I didn’t have much of audience yet in that space. So by spending months gearing up for the launch, I had time to do a couple of Facebook lives, run awareness ads, and put out a lot of content on my podcast about what it’s like to be an integrator and why that role is so important.

You need time to get people excited about what it is you have to share and what it is you plan to offer. My friend Meghan Maydel always says, you aren’t Beyonce. She might be able to come out of nowhere and drop an album that no one knew was coming and sell gazillions of records, but you can not do that with your offers. You need to warm up your audience and that takes…you guessed it…time. I see so many entrepreneurs have an idea, and get so excited to launch and then they put it out and get crickets in response. Often it’s because they didn’t take the time to warm up their audience and prepare them for THAT specific offer as well as build a bigger audience of people that need THAT offer. So once again, take time to build that launch runway and be seeding your launch with great content and messaging that relates directly to your upcoming offer.

(3) Get yourself a home run offer! The thing that probably worked the MOST in this launch was…I had an irresistible offer. This is the first time I’ve put out a program or digital product in which I barely even had to sell it. The COO Academy really is the only program of its kind. It’s super niche and super unique.

If you’re out there trying to just repackage what you learned from some other coach or marketing guru and trying to sell it to basically the same audience, you’re going to have a difficult time. That’s what so many online business owners are doing. Your offer has to be unique and/or your audience has to be really specific and niched down. You’ll have an even easier time selling your offer if you do both.

Also it’s not just about the program, but an irresistible offer has value. I really went above and beyond with bonuses this time. I not only gave them the course itself but I gave them a whole second course. I included coaching calls and granted access to a whole bunch of workshops too. They got a lot of stuff which equals a lot of value and that added value made the offer even more irresistible.

To learn the final element that worked really well for my launch, tune into this episode of Planning for Profit.

Now let’s discuss what DIDN’T work so well this time around, aside from the obvious of the cart open day happening just as a race revolution was amping up and me deciding to completely stop promoting anything launch related.

1) Launching to two different audiences at the same time. Not only did we have to create two sets of everything, two email funnels, two launch vehicles, two landing pages, two sets of ads, but it was hard to know who I was talking to at any give time. So I’m considering doing a couple larger launches to my primary audience for this offer, the COO-types, a couple times per year and then doing two smaller mini-launches to the CEO-types with the webinar a couple times per year. I feel like that might reduce the overwhelm that I had, because really the only overwhelm was due to that, two launches at the same time.

2) Not showing up enough on social media. I should have done better was showing up on Facebook and Instagram more in the months leading up to the launch to build awareness. One of the things I love about launching is that it builds your list because while you’re launching and running ads, more people are becoming aware of you and your product and signing up. But I should have done more list building ahead of the launch and been more visible. Visibility is not my strong suit. I much prefer hiding behind my laptop digging into Asana all day that go on Insta stories or do lives. But I can’t help people if I don’t show up and be visible to them. So that’s something I want to improve upon going forward.

Now you know what went well and what didn’t, last but not least here are the key changes that I’ll be making the next time I launch. First, due to the point I just mentioned above, I’ll be going live much more regularly (once per week if you want to hold me accountable) on my Facebook page to build more awareness ahead of the launch.

Next, I will be working to build my list and leads in between launches not only when I’m launching. I’ve got some amazing lead magnets that I’ve been working hard on that are ready to go, but I just need to build that awareness with some FB ads first before I start running ads to them. There are two components to a successful launch runway, building your audience and warming up your audience. I’ve got the second part down, now I just need to build the audience too.

To hear the final change I’m making to my launch and to dig into more about my lessons on launching, tune in here.