The #1 Secret to Launch Success 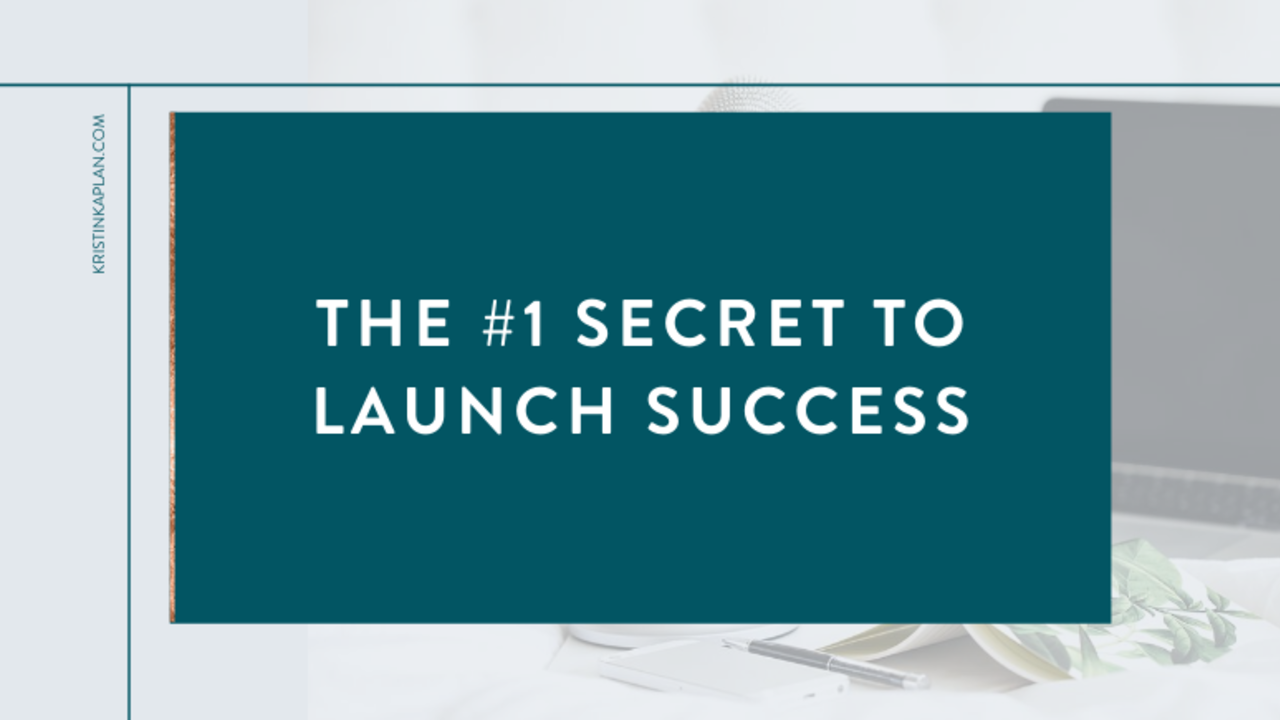 Let’s talk launching! I’m sharing with you the #1 secret to launch success. I want to dive deeper into what will make the biggest difference in not just your launches but your overall revenue and sales. So what’s the secret? First, repeating your launch and second, letting go of expectations and outcomes. (ok, so that’s really like two secrets.)

You see so many online business owners get so hung up on their launch results or not hitting their launch goals that they get completely stuck. They create an offer, set some launch goals. Then they do a launch, put in all this work and effort, and then they don’t see the sales they expected, so they shelve the offer and move onto launching something else instead.

And that’s exactly what NOT to do. Stick with launching the same offer over and over until each aspect of the launch is completely optimized. Your launch event is converting, your Facebook Ads ads are converting, your attendance rate is high, the messaging in your emails gets customers off the fence, all of it!

The odds of nailing all those pieces on the first launch is slim. The point of launching is to continue to improve that particular launch or funnel until it’s optimized and selling, and then you can make it evergreen and move onto your next offer, launch, or funnel. But stop with the shiny offer syndrome or launch overwhelm. I get that creating a launch can be overwhelming: there’s a lot of steps and pieces, especially if it’s the first time you’ve launched something. And that’s exactly what we we work on in my Launch Club Mastermind, making it less overwhelming and simpler by creating a launch plan.

But let’s back up for a minute and talk about launch goals and expectations. Where do these even come from? I get that we see people online doing 6 and 7 figure launches but that’s not the norm. An average conversion rate is around 3%. That’s it! And that’s of the people that are actually interested in your offer, so not just all the people in your audience.

Let’s say that you have an email list of 500 people, if it’s really warm list, you can probably assume that maybe 10-20% of them might sign up to learn more about your offer, register for a webinar, join a challenge, or whatever your launch event may be. And then your conversion rate is going to come from THAT number. So if 20% of your email list of 500 people sign up for your webinar, then you’ve got 100 interested people, and of that if 3% buy, then you’ve got 3 sales. And that’s pretty standard. So where are your launch goals actually coming from? If you’re just pulling out numbers and thinking, I’m want to get 100 sales but your audience is only 500 people, that’s going to be really tough to pull off.

I’m not telling you any of these to disappoint you or discourage you from launching because you absolutely can start hitting much higher launch goals, but it usually takes launching several times to get there. Don’t attach all of this meaning to your launch goals. They are simply just numbers and you can improve the numbers.

The best advice I ever received about launching is to treat your launch like an experiment. It’s just a game. Build the launch, run it as an experiment, and see what happens. Then take the data from your experiment, look at what you can improve or change, make those improvements or changes, and then run the experiment again. There doesn’t have to be all this meaning and overwhelm and expectations with launching. It can be fun!

I love launching because to me it’s fun to experiment and I no longer attach any meaning to the results. If I don’t hit a launch goal, I don’t consider it a failure. Typically as entrepreneurs, when we don’t hit a goal or something in our business doesn’t meet our expectation suddenly we have all this negative self-talk and think we failed. Knock that off! It’s all just an experiment.

To hear more about how I fixed my most recent launch and another simple, but successful tactic for improving your launches, tune into episode 089.