My Biggest Takeaways from 2018 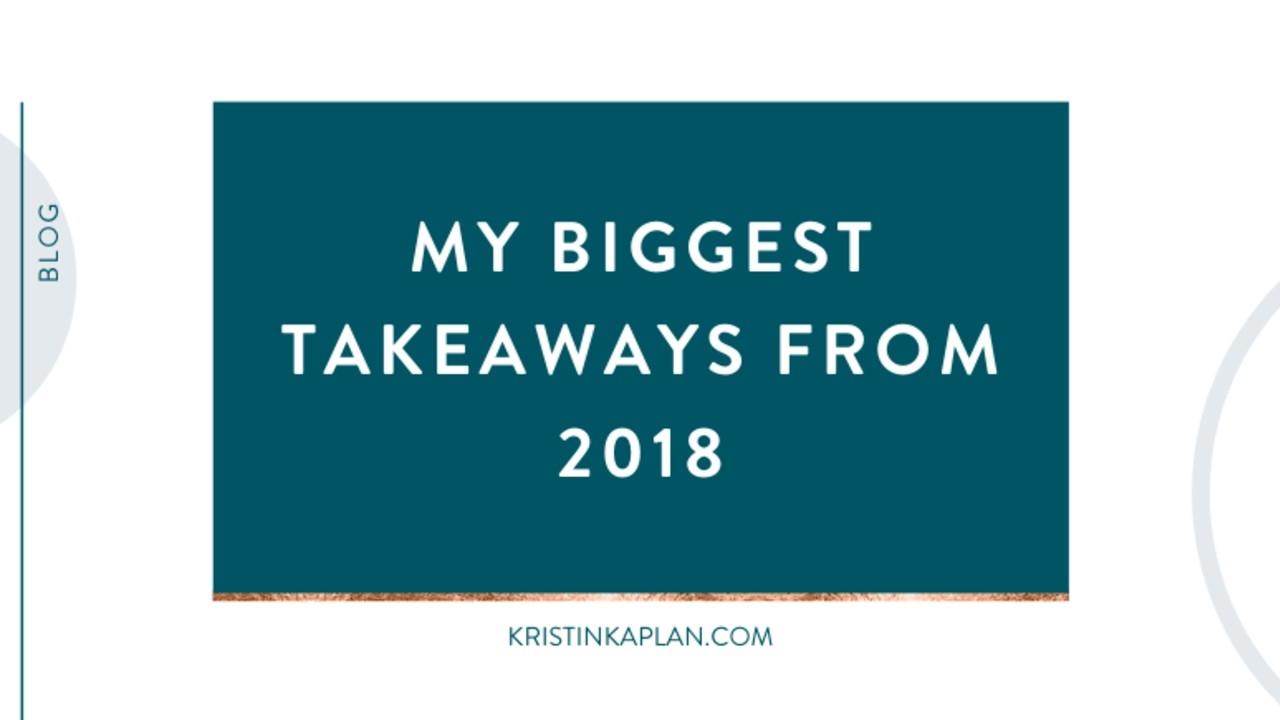 This past year started pretty slow and, honestly, I was a little worried about that. I was working with a couple of my business and project management clients, and I had a few 1:1 coaching clients. But I was really feeling like “What’s next?"

Have you ever felt like that as a business owner? Like you know you have a purpose, and you’re getting really clear on your strengths and your gifts... but something is just out of alignment. I think that’s the best way I could describe it.

And since I’d already been doing a lot of pivoting over the last several years, I was worried about pivoting again. I know the importance of choosing a lane and choosing a bridge to build and really going all in on that and seeing it through rather than bounce around from thing to thing, so a part of me was worried that if I introduced something new, I’d be going against all that.

But then I realized that my bridges were mostly done. I had a successful bridge (if you will) doing 1:1 strategy and coaching and my courses, so maybe I just needed to lean into the nudge that I was meant to do something new.

So I started this year just testing things... which provided me the first lesson I learned this year.

This is a Journey

I spent several months of 2018 just being patient, and learning, and playing, and asking questions, surveying people, and trying things on for size just so I could gain clarity. And that was OK! I spent the first half of the year just sort of playing around with ideas and going SLOW. I created a few funnels to test them out, I did a few surveys to my audience, I tried a few new service ideas out, I played with Facebook ads a bit — it really just became a time of experimentation. I wanted to get a better idea of what resonated with my audience and what people needed and, honestly, that’s not always something that’s immediately apparent.

But what’s this got to do with you? We need to get really comfortable with the idea that THIS is a journey. It’s a ride, and the sooner you start just taking action, trying things, playing the game, and putting one foot in front of the other, the sooner you’ll start getting more clarity on exactly how to grow your business, and attract more of the right clients, and get more people buying from you. I think often we feel like we need to go-go-go all the time and be constantly launching and constantly marketing all the things, but it’s OK to be in a season of stillness and planting seeds. And that brings me to the second lesson I learned.

Know the season you are in and be totally OK with it. You’re not always going to be in a massive growth season and that’s OK. There are seasons of planting, seasons of pruning, and seasons of just being still and discovering. Know what you and your business needs, and lean into that. I spent three months not growing my business but that was OK because I needed a bit of a break to figure out the right next step for me.

One of the things that came out of that was my Planning for Profit podcast. After spending a couple of months considering it, working through what I wanted it to be about, and defining its purpose, I finally launched it in March. And I committed to it! The podcast has grown every month and I’ve loved getting to know so many of you my listeners and getting to engage with you elsewhere like Instagram and Facebook. It’s been so fun. And I’m so pumped for what next year will bring for the podcast.

On top of that, I also invested in James Wedmore’s Business by Design program. And thanks to Business by Design, I felt really ready to put something out there. The next several months of the year brought a lot of work but also a ton of clarity. I first launched Profit Bootcamp, which began as a 1-week long pricing workshop. Then, thanks to some really great feedback, I revamped the program and relaunched it as Profit Planning Bootcamp in September, along with the Profit Accelerator, a 6-month group coaching program for those who wanted more individualized coaching from me but didn’t necessarily need 1:1 coaching. And all the feedback from THAT program that has led to revamping it even further and making it even better. And all of that came from me just planting those seeds and “getting ready for the harvest,” so to speak.

But that brings me to my next point…

You Won’t Get It Right on the First Try

Whether you’re putting out a new service or product or program, you’re going to have to refine it and make it better over time — so just put it out there already! Action breeds clarity. So stop waiting for it to be perfect, or pretending that’s what you’re waiting for because perfectionism is really just fear in disguise. I should know, I’m a recovering perfectionist myself. But stop waiting. Put it out there, and then tweak and refine and put it out there again. The podcast is a living organism that I improve on after each episode, and that I play with to see what works for listeners, guests, and myself. What I’m learning from my programs is advising my progress, and I’m learning from the people who sign up and provide feedback — but I didn’t nail it on the first try. What I did do was put it out there, with the intention of making it better as I go.

Of course, 2018 was full of other little lessons, that may seem slightly unrelated, but they are — trust me.

You also have permission to do things your way. We’ve heard a lot recently about the word “hustle” and, for years, it was a good thing. But now it’s being labeled as something terrible. But I say, if you love to hustle, then hustle! If you don’t, then don’t! Do you.

On the flip side of “Do you,” is one truth: you still have to take action. You aren’t going to get anywhere if you don’t move forward. And guess what? Sometimes that action is uncomfortable, sometimes it feels risky, sometimes it feels downright terrifying... but you have to take action. No one ever built a wildly successful business by sitting around waiting for things to happen or to get lucky. My dad always used to say to me, “There are 3 kinds of people in the world, those who make things happen, those who watch things happen, and those who are always trying to figure out what the heck just happened.” Which one are you going to be?

Everything Comes Down to Mindset

Everything comes down to mindset. I’m sure you’ve heard the quote by Henry Ford, “Whether you think you can or you can’t, you’re right.” You have to believe in yourself and believe in your dreams. I spent a lot of years playing very small in my business because I didn’t believe I could play big or make big things happen. But this year, that all changed and I think my word for 2019 is going to be BIG because I’ve got big plans and big dreams now and I’m fully confident that I’m going to make them happen. (Edit: My word became “Magic.” Learn more about that here.)

Let Go of the Outcomes

I finally stopped feeling the need to control everything and feeling like I HAD to make a certain amount of money, meet my launch goal, or book a certain amount of new clients in a particular month. Instead, I just focused on enjoying the process, serving people well, and leaning into my gifts. I didn’t realize how much I was pushing things away; pushing money away, pushing clients away, all because I was trying to control everything my way. I was constantly in this state of worry and anxiety and that was actually keeping all this good stuff from coming in. Once I just let go, stopped worrying about everything, and stopped worrying about outcomes, it all got easier.

Well, that’s my 2018 in a nutshell. I hope that these lessons give you something valuable to take with you into 2019 and I’d love to hear from you. Follow me on Instagram at @kristinckaplan and let me know what lessons YOU learned this year.