How to Improve Your Next Launch 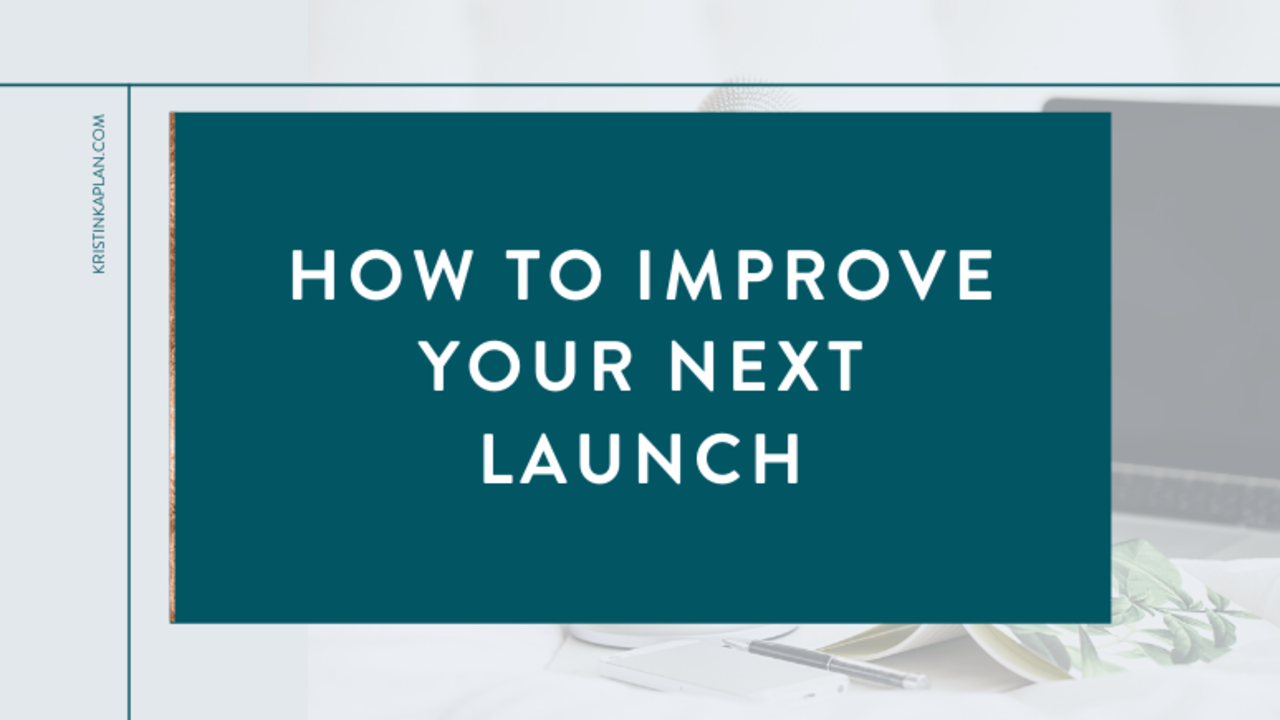 Do you feel like everyone and their mother has a course or membership or group program right now? Because I do. The online education space has exploded in the last few years and now I feel like every single person has a signature course, an inner circle, a mastermind… all the things.

But with so many people entering into this space and so many people launching courses, digital products, group programs, and masterminds, it’s becoming CRUCIAL to know what you are doing when you launch.

Because launching is how you get your offer or product in the hands of the right people. And if you don’t launch well, you’re going to have a lot of trouble making an impact or making any money. So that’s why I wanted to talk about the biggest mistakes that I’m seeing people make when they launch so that hopefully you can improve your next launch!

The first mistake I see is too much focus on the content of your offer — instead of focusing on the launch. When someone decides to launch a course, they spend every day leading up to the cart open working on the course itself and then find themselves 1 week out from cart open day and they’ve barely promoted the launch, haven’t put together a webinar yet, or don’t have a sales page because they’ve been so focused on the course or the program itself.

Now here’s the thing” it makes no sense to put a ton of time into a product or program without first knowing if it’s going to sell! Don’t worry about creating the course! Launch it and see if it sells first! Then you can create it afterward. I’m a huge fan of the concept of "Monetize before you make it." The majority of your effort during your launch runway needs to be on building an audience and promoting the launch, rather than worrying about recording videos for your course or creating the product.

Now if your product is a workbook of some kind, like the Pricing Workbook, then you should probably have it ready and available when someone buys it. But I made this mistake the first time I launched the Pricing Workbook, spending months trying to get it perfect before I started focusing on my launch. I also could have pre-sold it and let people know when they’d receive it. That probably would have been smart. But oh well, you can learn from my mistakes.

Mistake #2: Focusing on the Features — Not the Benefits

The second mistake is being focused on the features of your offer and not the benefits! So often when I’m working with a client on a launch plan, I ask them about their offer and they say, “Oh well it’s a group coaching program and it has 6 modules, 3 live calls, two bonus trainings, a Facebook group, 17 worksheets, and a partridge in a pear tree.”

No one wants to buy 17 worksheets, 6 modules, 3 live calls, and a Facebook group. They want to buy a TRANSFORMATION. They are seeking an end result. What is that end result? People spend the majority of their time during the launch worrying about whether they should do live calls or pre-recorded calls or whether it should include a Facebook group.

Guess what, no one cares! They just want to know what their life is going to look like after they go through your program or buy your product. They just want to know what’s possible, believe that you have the solution they need and have the confidence to take action. That’s what they care about. So don’t spend your launch fiddling around with the features, get back to the benefits and focus on selling those and speaking to those as much as you possibly can during your launch.

Another big mistake I see when it comes to launching is having a crappy launch plan, or worse, no launch plan at all. If you’re thinking, “I’ll just set a launch date and then figure it out as I go,” good luck! Because this is where all that launch overwhelm comes from. When people talk about how launching is stressful and busy and not fun, it’s probably because they don’t have a good plan.

Not having a detailed launch plan is what leads to overwhelm, missed details, lost opportunities, and it makes it really difficult to show up well during your launch and serve your audience. You’ll be too busy pulling all-nighters to finish your webinar slides or throwing up a sales page at the last minute. So plan out your launch WELL ahead of time and break down into the smallest of tasks and details. That’s honestly my favorite part because I’m weird.

Mistake #4: Playing Too Small and Safe

Have you ever done a silent launch? Like you had these intentions to do a really awesome launch with a challenge or maybe a live video series? You were going to do a big ramp-up to the launch, run lots of Facebook ads, make it this huge big thing, and then... you got scared? Maybe you worried that, if you did all those things and did this huge big launch, no one would buy.

So instead you did a silent launch. You decided to just send a couple of emails to your list, maybe mention the doors were opening once or twice on Instagram stories, and then you closed your cart and threw up your hands and said “I knew it! I knew no one was going to buy!”

But you guys, if you’re going to launch, LAUNCH! Play full out! If the launch falls flat, who cares! That doesn’t mean it’s a failure, that’s just the meaning you’ve attached to the outcome. Launching is a game, remember. It’s a numbers game: if you don’t get the results you want, the good news is you now have data you can look at and analyze to see where you can improve. You can see what you need to work on.

What most people don’t talk about when they talk about launching is that the majority of people don’t hit it out of the park and have a huge 5-figure or 6-figure launch on the first try. Or even the second or 10th launch. Launching takes practice and it can take a lot of launches to get your messaging right, to get your offer right, to build a big-enough audience to get enough sales.

If you’re doing silent launches or scaling back — instead of going all in because you’re worried about putting too much time, effort, or money in, or that it’s not going to pay off — you’re not going to get the data you need to improve and get to your goals faster.

Launching (and business in general) is a numbers game. It’s all about gathering data and numbers to analyze and improve upon. So if you keep changing lanes and changing your offer, you don’t have any comparable data to analyze. You’re starting from scratch each and every time you launch and you’re basically just throwing darts in the dark, hoping for a random bullseye.

Just because a launch doesn’t turn out the way you want it doesn’t mean you go back to the drawing board and start from scratch! Look at your numbers, figure out what you can work on or fix or improve, and launch again. And again and again.

Mistake #6 Trying to Avoid All the Mistakes

At the end of the day, all of this is to say: GO OUT AND MAKE MISTAKES. Go out and play with your approach, your ads, your webinar titles. It’s OK to change how you launch your offers, and it’s OK to find out that something doesn’t work. It’s just part of the process. So stop playing small and stop expecting perfect launches. Launch and see what you learn!