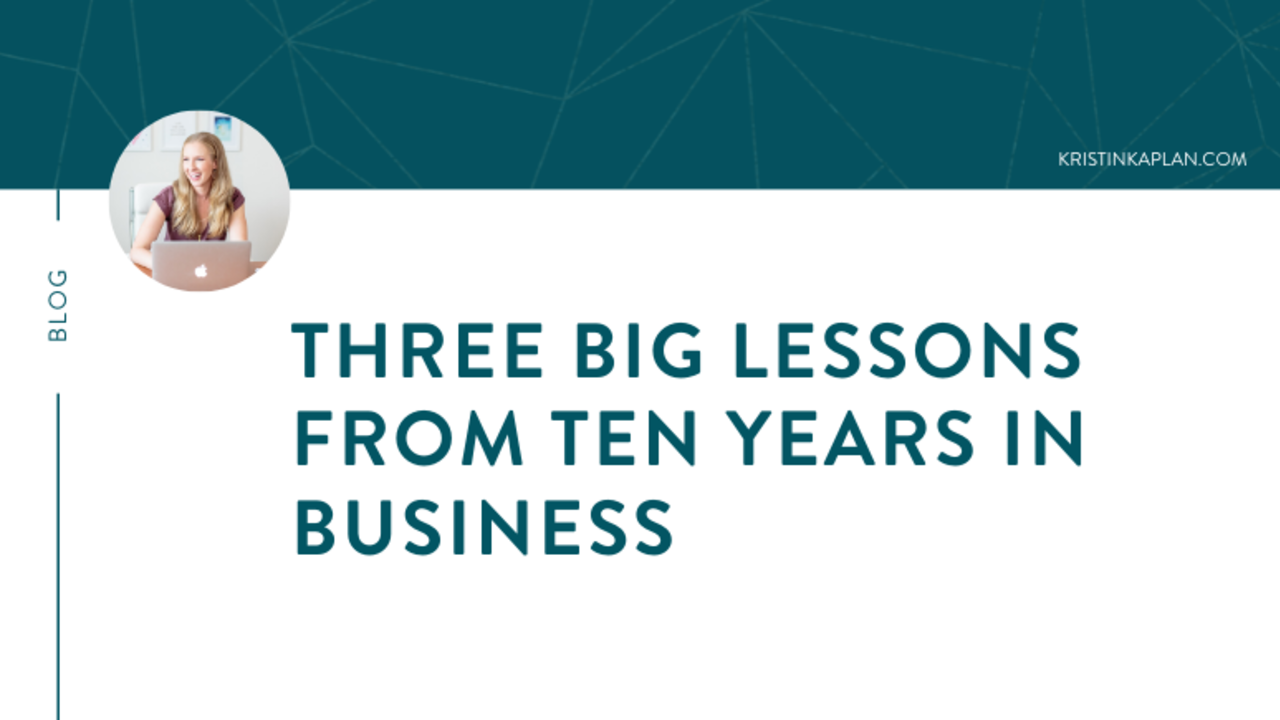 It's crazy to me that my dream to start a business started over ten years ago. It's even crazier that my dream began when I was watching a TV show called "Whose Wedding Is It Anyway?" Yes... I decided to become a wedding planner based on what I saw on a reality TV show.

When I saw the wedding planners on that show, there was just something there that clicked for me. I thought, "I could totally do that!" In fact... I think I'd be really good at that! I'm bossy, I like to run the show, I like to tell people what to do, and I really love pulling together a plan and executing all the pieces of it.

So then and there I decided to become a wedding planner.

In February of 2008, I applied for a business license, pulled out that business plan I had spent a year writing, and I went to work.

After months of networking, talking with every vendor I could get ahold of, and trying to meet local brides and grooms (all before the days of social media), I found several couples who were willing to let me plan their weddings for free. Which brings me to the first lesson I've learned in ten years of business:

Just Freaking Go for It.

For some reason, once I had that weird idea that I would make a really good wedding planner, I had no doubt in my mind that I would do it. And I did. I didn't hesitate, which is odd for me. I just did it and I didn't stop because I knew it was what I was supposed to do.

Sometimes we overthink our big ideas and spend way too much time hashing them out in our heads instead of just going for it.

The next few years were a whirlwind. I worked all the time. After doing a bunch of weddings for free, I finally had paying clients and money was coming in. I made lots of vendor friends and I even got married myself! Things were looking great. Except for one issue:

I was working all the time.

In one year of business, I had done 35 weddings. Thirty-five weddings! That's insane! What was I thinking? And that was just in one year! I couldn't keep up and things were starting to fall through the cracks. I was missing details. I was in meeting after meeting after meeting. And right around the time when it seemed like life couldn't get much busier? I got pregnant. It wasn't exactly easy.

Admit When Something Has to Change and Change It.

I spent years trying to just work harder instead of just admitting that my business and life weren't working the way I wanted them to. If something isn't working correctly in your business, stop. Hit pause. Take a breather. Find some margin to figure out what it is and what needs to be done.

I always thought that if I stopped going full speed, everything would collapse around me. I didn't want to lose ground. But that's such a limiting belief.

You get to determine your own speed and your own course.

Once I rebranded and raised my prices, I was finally able to coast for awhile. I was doing about 15 weddings a year, which was the perfect amount for me. Things were good. I figured I would just plan weddings forever, so I hadn't even considered what would happen next.

Since I had a successful business for a while, other vendors and weddings planners started approaching me for help. I would get emails with questions or people asking to "pick my brain," and I would answer and help them. At this point, I was completely oblivious to the fact that there was a whole online business world dedicated to helping other business owners.

I kept at it as a side-gig and started offering mentorships to people that wanted help with their businesses as an additional revenue stream. And it was great! This helped me learn lesson number three:

Don’t Be Afraid to Pivot.

If you feel yourself being pulled in a different direction, it's okay to explore it. I decided to launch my personal brand in 2015 and I'm so glad that I did. It's truly a perfect fit for me for where I'm at right now in my career and also in my personal life.

I've done so much since then - I've coached, mentored, and strategized with dozens of business owners on how to become more profitable, I created a community for wedding pros called the Wedding Business Bosses, and wrote the Pricing Workbook, which is a guide for creatives and online experts to help map out a profitable pricing strategy.

And that pretty much gets you up to speed with what I've been doing in business for the last ten years! I hope that my story and these lessons have resonated with you. I would love to hear more about your business lessons - leave a comment below and let's talk about it!