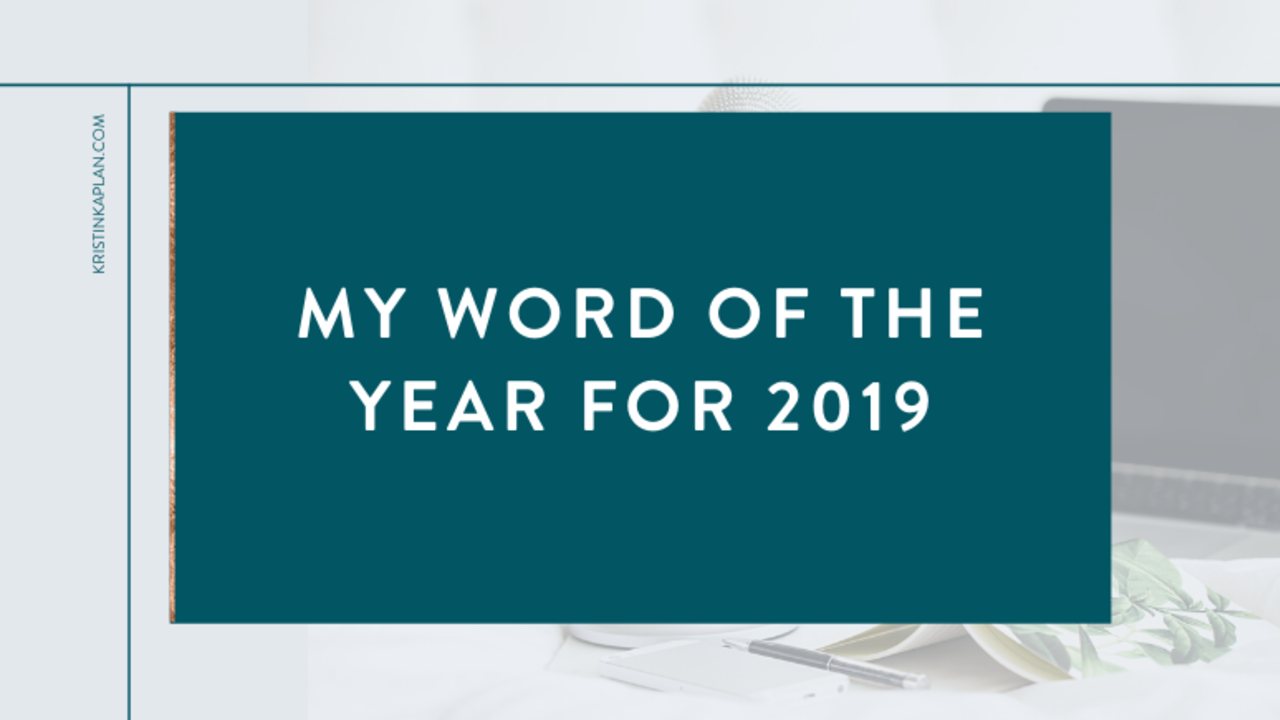 Does anyone else feel like January (2019, if you’re reading this in the future) has been the longest month ever? I feel like we should be in Q2 by now but for some reason we’re still in January. Maybe it’s because I crammed like a million things into this month, starting with the Profit Planning Party, and then opening the doors to the now-revamped-as-a-membership-program, Plan to Profit.

But before I get into all that, let’s talk about words for the year. Do you set an intention for the year with a specific word? I believe this trend originally started with Ali Edwards and her One Little Word campaign but if this is new to you, the idea is that, at the start of the year, instead of setting a whole bunch of resolutions that never happen, you choose a word for the year. And that word should symbolize what you want to cultivate and lean into during the next 12 months.

I started choosing a word of the year back in 2015 or so and I like the practice. I feel like having a specific word to refer back to you helps ground me and remind me throughout the year (when things get off course) what I should be focusing on and cultivating.

So today I wanted to share with you my word of the year — and yes it took me until almost February to come up with it but that’s OK, because there is nothing special about January 1st.

Why I Chose This Word

To explain why I chose my word (I’ll tell you what it is in just a minute), I’m going to use the words of my favorite musician of all time, Bruce Springsteen. Bruce talked about the E Street Band and when he finally found the right configuration for the band members. He says:

“Now, a real rock and roll band evolves out of a common place and time. Bands come out of towns, out of a city, out of a neighborhood, And they come along at a particular moment, you know? Bands are all about what happens when musicians who come from the same streets with the same passions and influences go in search of lighting and thunder! They come together in a whole that is greater than the sum of the parts. They may not be the best players. That’s not necessary. They need to be the right players and when they play together, there is a communion of souls, and a natural brotherhood and sisterhood that manifests itself and a quest, a quest is begun. You’re in search of something, an adventure’s undertaken. And you ride shotgun. In a real band the principles of math get stood on their head. And 1 plus 1 equals 3. Now one plus one equals two, that happens every day. That is not magic, that’s the grind. But when one plus one equals three, that’s when your life changes, and you see everything new and these are days when you are listed by visions, when the world around you brings down the spirit, and you feel blessed to be alive. It is the essential equation of love, There is no love without one plus one equaling three. It’s the essential equation of art, it’s the essential equation of rock and roll, it’s the reason the universe will never be fully comprehensible.”

What a great quote, right?

To me, what Bruce is describing is that magic. Something incomprehensible happens when just the right ingredients come together in just the right way and somehow 1+1 equals 3. And I’ve seen this happen in business too. When you’ve finally got the right mix of strategies and mindset and work and then something just clicks, and everything takes off. But you’ve got to leave room for the magic. We get so caught up in the how sometimes or thinking “There’s no way I can possibly meet that revenue goal,” or “There’s no way I can possibly book that many clients this year,” and we get down on ourselves and we don’t put in the work. We pull back, we think small, and I’ve been there. That has been me in the past but I’m not playing that way in my business this year.

This year, I’m leaving room for the magic. So that is the word I chose for the year.

Now don’t get me wrong, you can’t just not do the work and hope that those new clients appear out of nowhere or hope that you suddenly get a revenue windfall. That’s not how this works. All your hard work has to align perfectly with everything else to produce something that is greater than the sum of its parts — that 1+1=3 thing The Boss was talking about.